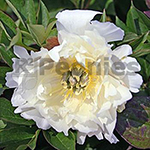 White Emperor is a white semi double Intersectional Hybrid. With the soft smelling flowers recommended for garden and city parks all over the world. White Emperor is rich of flowers coming out of the dark foliage. Blooming in the mid late season. White Emperor is a Peony for solitary planting as well for large groups planting. White Emperor stays also after the blooming period nice. The foliage gives in fall beautiful Indian summer colours.

What are you looking for?